How long does THC stay in the body

It is believed that tetrahydrocannabinol, or THC for short, can be detected in the body 30 days after cannabis use. To date, there are many tests that determine the presence of drugs in the body, the sensitivity and time period for determination are different. In addition, according to leading researchers, the task of calculating the number of days after the use is complicated by different ways of using and the characteristics of the body of an individual.

How the tests work

When testing for the presence of drugs in the human body, specialists analyze different biological materials:

Blood tests done within 24 hours of marijuana use show quite accurately the presence of THC in the body. The longest window for detection is given by hair analysis.

Time of detection of THC in the body

Every person is unique, their metabolism happens differently and at different rates. It depends on many factors. These include:

At one time, special studies were conducted, based on which general recommendations were developed for people who were to be tested for the presence of drugs in the body.

Paul Carey, director of the Laboratory of Toxicology and Drug Control at the University of Missouri (USA), after analyzing a large amount of data, has concluded that the maximum detection window is 25 days. On average, 9 to 10 days after use, the vast majority of cases did not detect THC.

At the same time, Carey believes that for those who smoke marijuana occasionally or have tried it for the first time, just 72 hours is enough for no traces of cannabinoids to be detected in the body.

A good method to lower THC levels in the body quickly is to drink a lot more water than usual. However, a more effective tactic to speed up the detoxification process is a balanced diet and exercise. Also keep in mind that being overweight increases the time it takes to eliminate cannabinoids from the body. 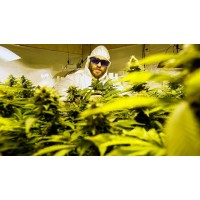 To unlock the full genetic potential of a cannabis variety with a high THC content, it takes a lot of effort. First of all, the plants have to be given the right conditions to develop.

Description and characteristics of the variety White Russian OG is a hybrid with a dominant indic..