How marijuana helps with epilepsy

A recent study by scientists working in reputable research centers in the United States, the United Kingdom, Australia and other countries has convincingly shown that marijuana use can significantly reduce seizures in more than half of patients with epilepsy.

The scientists conducted a meta-analysis of several dozen scientific articles on the topic of epilepsy treatment using cannabis. According to the study, the substances in cannabis help significantly alleviate the symptoms of this severe disease and improve the quality of life.

Since ancient times, people have used cannabis to relieve pains of various origins, nausea, migraines. Cannabis contains a group of cannabinoid substances, which have a wide spectrum of action. The main ones are: tetrahydrocannabinol, cannabinol, cannabidiol, dronabinol.

Cannabidiol (CBD) plays a very important role in the treatment of epilepsy. It is thanks to this substance, a high level of which is contained in the medical varieties of cannabis, it is possible to effectively stop the seizures. The active substances in marijuana act through the receptors in the brain and the cells of the immune system.

Traditional drugs that are used to treat epilepsy have many side effects, such as psychosis, depression and others. In the case of moderate use of marijuana to relieve the basic symptoms of epilepsy, there are no such side effects.

These properties of cannabis offer hope for many people who suffer from frequent epileptic seizures to get them under control through the use of medical cannabis varieties. It is well known that some leading pharmaceutical companies have begun research to develop and market new marijuana-based epilepsy drugs. 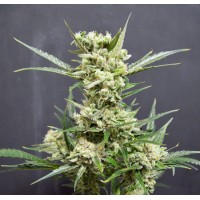 Variety description and characteristics Haze Auto is an indico-dominant variety with a strong psy..