All about hemp seeds for firewood

Cannabis seeds are divided by gender - feminized and regular, and by type of transition to flowering - photoperiodic and autoflowering. The classification is not complicated, and we have tried to explain it in as much detail as possible. In the article you will also find recommendations on the selection of seeds, taking into account the place of the future grovet and other useful tips.

Cannabis is a bipolar plant, but only the unfertilized female bush, the sensimilla, produces a crop of cones. Regular seeds are about equally likely to produce both a "girl" and a "boy", so the latter must be identified and removed from the plantation in time. This should be done before flowering begins. If the moment is missed, the pollen from the male plant will fertilize the female plant, and the grower will get new seeds instead of cones-fruit.

With the right knowledge in time, separating "boys" from "girls" is not difficult. It is also possible to increase the likelihood of developing just female plants, but even with all the rules, it is impossible to guarantee that 99.9% of regular seeds will give "girls". Only feminized seeds with stable genetics have such a high probability. Regulars lose out to them in viability, yield uniformity and assortment - many cidbanks simply do not produce regular varieties anymore. The main advantage of this type of grain is the low price. If you decide to take them, you may find the following subsections helpful.

How to determine the sex of a plant

Male preflowers appear at 1-4 weeks of vegetation, female preflowers at 4-6 weeks. Hermaphrodites have signs of "boys" and "girls", do not bring a crop, so they also need to be removed from the plantation in time. For photoperiodic plants vegetation lasts at least 4 weeks, autoflowers need about 3-4 weeks to develop. During this time, the grower should notice the following signs:

How to grow female bushes from regulars

The main requirement for those wishing to grow sensimilla is to protect the plant from stress. The same is true for feminized grains, where there is still a risk of getting a hermaphrodite. The basic rules for the growing season are:

Femoc cannabis seeds are better for small quantities to try out, but are also more suitable for commercial grows and are recommended for beginners with little or no experience.

The main feature is that plants need to be switched from growing to flowering by reducing the length of daylight hours. This has its pros and cons, so it is worth buying photoperiodic seeds if the grower:

Who will benefit from autoflowering seeds

The difference between autoflowering and photoperiodic varieties is the independent beginning of flowering after a few weeks of vega. The grower is not required to reduce the duration of the light day, it is possible to keep it within 18-20 hours during the whole life cycle of the plant.

For all these properties of autoflowering cannabis, it is advisable to buy the seeds if

The prefix F1 refers to first-generation hybrids. It makes no sense to take seeds of other generations - they will not have outstanding properties, in some cases they will not yield at all. It also means that hybrids of the first generation are not pollinated to obtain new seeds. If you want to retain the same properties, the plant is cloned.

F1 hybrids are the product of careful selection of varieties. Their characteristics far exceed those of their parents, such cannabis can have high productivity, powerful effects, unusual flavor, and high vitality if desired by the breeder. 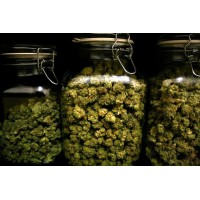 Growing from A to Z: from germination to weeding

We have already told you how to organize grovelling in the box and outdoors, about the selection of soil, lamps, feeding and ventilation. In this article, we decided to focus specifically on the process itself, to describe it from A to Z: from germination of grains to harvest, drying and treatment of the crop.