Archaeologists: Cannabis was smoked for its psychoactive effect 2,500 years ago

While excavating tombs in the Palmyra Mountains of western China, archaeologists have found possibly the earliest evidence of ritual marijuana use, as reported in the journal Scientific Advances. The roasters, which historians estimate to be more than 2,500 years old, contained traces of CBD, a cannabis substance that is produced by the oxidation of THC.

It is believed that ancient people used marijuana during funeral rituals, perhaps to communicate with the dead. And the THC level of this cannabis is higher than that of the wild-growing and cultivated cannabis in Eurasia at the time. This means that the people using it clearly distinguished between the effects of the cannabis varieties. Perhaps they even grew the psychoactive strains on purpose, which means we probably have evidence of the earliest selections and grooming.

According to Mark Merlin, a scientist at the University of Hawaii, this is the earliest evidence of cannabis use, not for therapeutic or industrial purposes, but for its psychoactive effects. Science knows that cannabis as a source of food and raw material was cultivated as early as 6,000 years ago, and we know about the use of marijuana's intoxicating properties mainly from historical texts. For example, from the testimony of the historian Herodotus, who described the use of psychoactive marijuana in rituals and recreational purposes. Remarkably, his testimony coincides with the period in which the found roasters were used.

In addition to the burning of psychoactive cannabis, burial rituals were accompanied by sacrifices, as evidenced by skeletons with signs of cuts and lacerations, and rhythmic music - archaeologists found a harp, which is usually used in such ceremonies. All this is supposed to have helped those present at the funeral enter a state of altered consciousness. Merlin sees it as a spiritual practice that was supposed to help the dead find their way to the afterlife or make contact with the deities. 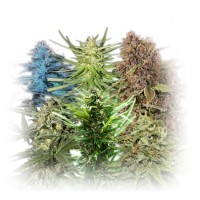 How to choose a cannabis seed store

It is legal to buy hemp seeds. They do not contain any psychoactive components, so they are not legally classified as narcotic substances. Cannabis seeds are nutritious and healthy, so they are used as a food additive, birdseed, feed or bait for fish. The reason you might want to buy cannabis seeds could be anything, even if it's for collecting or as a keepsake.

There are basic rules that must be followed in order to successfully grow cannabis indoors. First of all, find a suitable space, depending on the possibilities and circumstances. It can be an old cupboard, a basement, a separate room, a special grow box or a grotto.